Whew! The past year has been a wild ride as Racing Beat has experienced overwhelming demand for almost every item in our product line. We’ve been working long hours and weekends as finished product leaves our production building and then heads directly to the shipping table. Now, limited raw material availability, significant cost increases, and supply chain delays are continuing to impact our product availability. We’re adding new production staff as we attempt to catch up with orders, we appreciate your patience! If we’re temporarily out-of-stock on an item, bear with us, we’re pushing as hard as we can. While many of us have greater issues that concern us, the joy and passion of our Mazda vehicle can be an ideal and momentary distraction from daily life. We invite you contact us personally with any questions or comments regarding our products, we’re here to assist. Thank you for your continued support.

Spring is around the corner!

It’s hard to think of working on your RX-7 when the weather is cold and gray, but spring is right around the corner. We’ve fine-tuning our production schedules and have stocked up the warehouse with lots of RX-7 exhaust components. Time to start checking off your wish list!

Read More
Comments Off on Spring is around the corner!
TOP

For 2020 we’ve added a new Racing Beat shirt design to the line-up. Super soft shirts and a new vintage-aged logo design provide a contemporary look and awesome comfort! Our best fitting shirt ever. All sizes available.

Read More
Comments Off on New 2020 shirts are here!
TOP

Our Power Pulse mufflers for all 1979-85 RX-7’s are now back in stock! The dual inlet Street Port muffler shown is a direct fit for all 81-82 RX-7’s and is also used in all Street Port Complete Dual Exhaust systems that we offer. Check them out in the Exhaust section of the parts catalog. 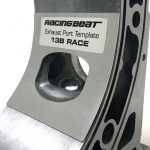 We now offer laser-cut exhaust porting templates for 12A & 13B performance and race applications. Patterned after the original templates designed decades ago by Racing Beat’s race engine builder Jim Mederer, these templates are now easier to use. Just mark the location per the instructions, hold in place, and then scribe the pattern!

Racing Beat has teamed up with world renowned hydraulics supplier Goodridge LTD (UK) to offer a line of braided stainless steel clutch lines for the 1981-85 and 1986-92 RX-7 applications. Hard to believe that this gap has existed for all these years in their product line, so we reached out to see it they’d be interested in producing these lines for us. The answer was obviously “yes”, and we now have these high-quality lines available exclusively through Racing Beat. Exact fit, great price, check it out! 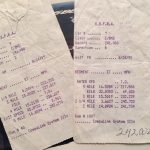 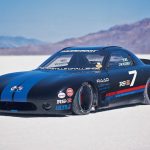 One of the best things about poking around the Racing Beat archives is the discovery of something that hasn’t been seen in decades – especially when something of rotary historical is uncovered!

In this case, we recently discovered in Jim’s desk a stack of time slips from the 1995 Bonneville Speedweek event. After sorting through the stack we located two time slips that Jim Mederer (Racing Beat co-founder and driver) received after making his two historic record-setting runs.

Each slip reflects the class (C/Blown Modified Sport), existing record, course direction, time/date, and speeds recorded through the three 1-mile timing sections. The speed at the end of each 3 mile run is factored into the determination of a possible new record speed.

Bonneville timing procedures require that if an existing record has been eclipsed, those cars are held at the far end of the course and a return run is made later in the day, and then both runs are averaged. We can only image the long, stressful delay as competitors wait their turn for a second run. (If you aren’t familiar with a bit of Racing Beat history, back in 1992 Jim drove this same car at Bonneville, painted in a white color scheme, only to have the RX-7 take flight and become airborne a similar speeds.)

At 6:37PM it was finally Jim’s turn to make his return run. Years of preparation, sponsor expectations, and personal pride was on the line. At the end of the run Jim was handed his time slip, at the bottom it read 241.734MPH. Was this enough?

After the car came to a stop, Jim turned over the return run time slip and hastily penciled out the average between the two runs….242.002 MPH! He had set a new land speed record. Jim then wrote the new speed record on the front of the slip, showed it to the crew and safely stored it away, until now.

The Racing Beat RX-7 record of 242.002 MPH has stood for over 23 years, a remarkable feat considering most Bonneville records are eclipsed with just a few years. However, this record will never be broken now as the BMS class has since been retired, a fitting and lasting tribute to the talents and dedication of Racing Beat legend, Jim Mederer.

New for 2018, we’ve decided to up grade our FC RX-7 mufflers by only offering our larger 2.375″ OD Power Pulse Mufflers for use on either stock replacement or street-legal RB cat-back systems! Our legendary RB mufflers now feature high flow 2.375″ inlet tubes for optimal exhaust gas flow through each muffler. For more information visit the Exhaust – Cat-Back Systems menu.

Read More
Comments Off on Our Rotary Parts Catalog is Available Online!
TOP

Be sure and visit the Racing Beat Facebook page for a fascinating look at Racing Beat’s historical past. We’ve dug through the photo archives and uncovered countless never-before-seen photos of Jim Mederer and Takayuki Oku in the earliest days of Racing Beat’s foundation. Follow along over the next few weeks as we take a fascinating walk through the birth and development of rotary-engine racing and development in the US. To join in, just follow the Facebook link on the home page.