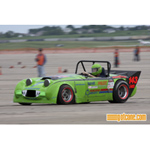 Jeff Kiesel in the 2011 KFR / Goodyear Tire / Racing Beat Turbo Sprite has great success back in Lincoln Nebraska. With back to back major races in Lincoln Nebraska Kiesel went back to compete in both the Lincoln Pro Solo (5-26-5/28) and the Lincoln Spring Nationals (5/29-5/30). Kiesel brought home big wins at both events. The Lincoln Pro R1 class (race tire class) was a 14 car field made up of 7 prepared and modified car classes. Kiesel crushed the field winning overall by 1.855 seconds over a talent packed class made up of 7 multi time national champions. As if that was not enough Kiesel then ran away with the win in at the 2011 Lincoln Spring National (5/29-5/30) EM class win. Despite hitting 1 cone every single run the first day of competition (adding a 2 second penalty for each cone hit) Kiesel still put a big hurt on the class winning by 5.511 seconds with the 2 second penalty.

We caught up with Kiesel during the drive back and here is what Jeff had to say “The events in Lincoln are the best and most important because Lincoln is the site where the National Championships and Pro Finale are held. Extra attention and effort are put into these events, along with more detailed notes. The car was amazing at the Pro and was dialed in perfectly. We did crack the rear end housing on final runs at the pro and I had to weld the housing up right after the final runs to get it ready for the following event. I had to change the set up on the car during the final day of competition for the Spring Nationals and I got the set up pretty good in time for my final run. The car was still not 100% and felt like the a few changes could have dropped us another second. Overall it was a great event for us and we learned a lot while we were there.”